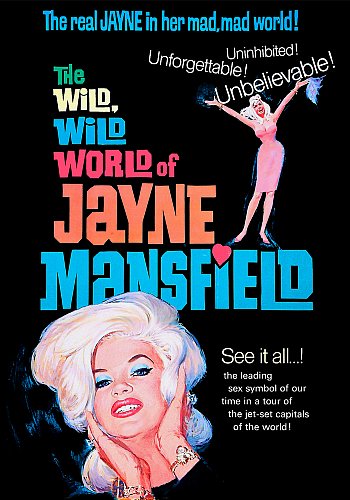 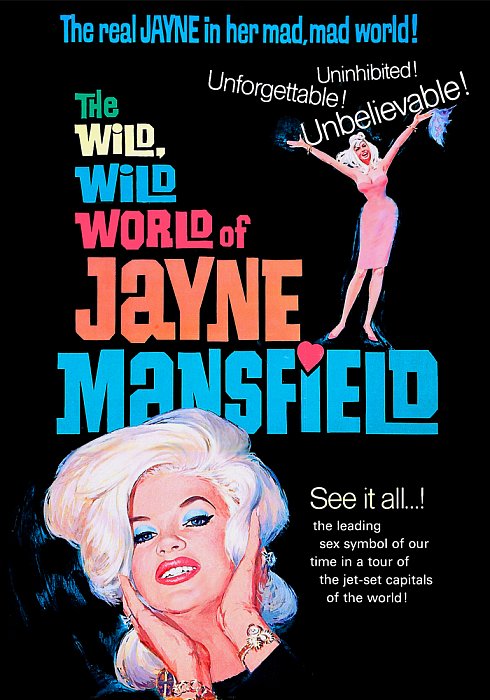 It's THE WILD WILD WORLD OF JAYNE MANSFIELD, a mondo-style celebration of all things Jayne Mansfield in which the starlet turns a European vacation into a Skin-Goddess Spectacle! See Jayne visit a nudist colony on the Isle of Levant! Go with Jayne to a gay bar where she quickly gets confused! Join Jayne at various Parisian strip clubs and watch as she takes a private lesson at Pierre’s striptease school! Marvel with Jayne at the wonders of an "All-Girl Topless Band," an underground Transvestite Beauty Contest, and Jayne’s own unabashed nude scenes from the rarely seen skinflick Promises! Promises ! All of which is capped off with shocking photos of Jayne’s fatal car crash before hubby Mickey Hargitay (Bloody Pit of Horror ) takes us on a final tour of Jayne’s Pink Palace! Wow, wow and double wow. Breathtakingly berserk, this is definately Must-See, Must-Have, Must Mansfield!