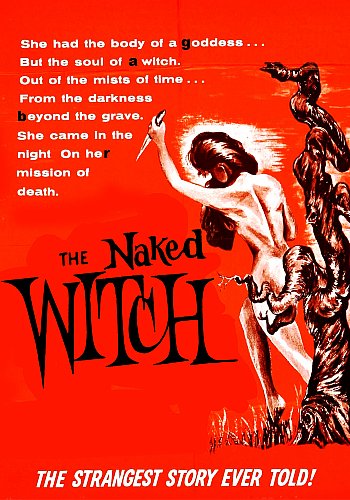 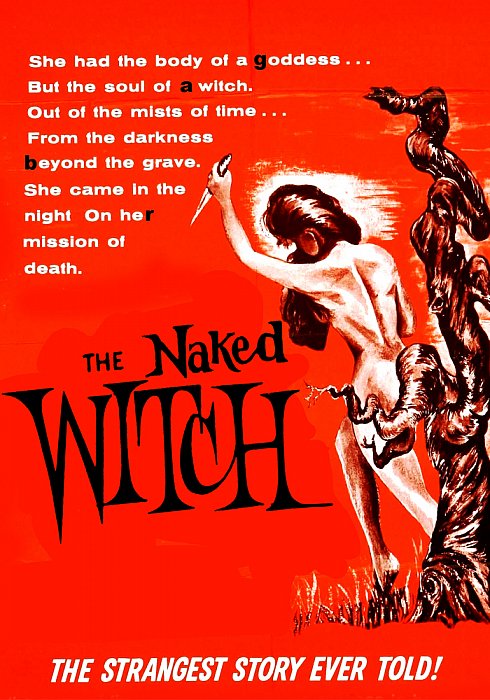 In fact, she's wandering around the country bare-ass naked! College student ROBERT SHORT visits the German "hill country of Central Texas," stays at the Schöennig's Inn, and starts annoying everybody by asking about witches: "I vill help you vhen I can, but ve must not talk of ze vitch!" But when Kirska, the innkeeper's granddaughter, brings him a book detailing the history of "The Luckenbach Witch" (LIBBY HALL) -- a "widow who walked by moonlight" who was executed a hundred years earlier -- our less-than-brilliant hero promptly digs up the witch's grave: "There it was! The mummified face of the widow! With eye sockets staring! What a prize!" Mr. Intellectual then removes the stake protruding from her bones and Bingo! Via some god-awful animation, The Naked Witch comes back to life and strolls across the countryside in her birthday suit. She also sneaks up on a sleeping Kirska and rips off her negligee. The Wicked Witch of the South then quickly goes about her business and stabs two Schöennings to death before the student discovers her skinny-dipping in the moonlight: "This lonely nymph, whose friends were water snakes and the moon, seemed to know every sound of the night..." Following her to her hideout in some photogenic caves, she seduces him with some kind of wacky witch dance then gleefully pounces on top of him. But when he sees Kirska's name conveniently written on the witch's wall of victims, he realizes he better send his sexy new girlfriend back to the grave... An amateurish but surprisingly atmospheric regional rarity.

Filmed in Dallas in 1961, this was cult director LARRY (Zontar, The Thing from Venus) BUCHANAN's first horror film. (S. F. BROWNRIGG, another director of Texan cheapies like Don't Look in the Basement, did the sound.) There's also some hilarious built-in "black bar" optical censoring which was meant to tone down Miss Hall's frontal nudity but also manages to obliterate whole portions of the picture! From producer CLAUDE ALEXANDER's personal 35mm negative and the only video version available in color. This is one witch who'd look good on any broomstick.